3+ Ways to Measure the Impact of Social Media on Search

(How to Measure the Impact of Social Content (blog posts, Tweets, etc.) on Search Within Social Media and Social Networking Sites)

In this post, we’ll focus on how to measure the impact of Twitter, which reached about 22 million people in May.

Just as people had to learn how to search using traditional search engines like Google and Yahoo, people are learning how to better search social media sites like Twitter. Increasingly, they are using hashtags. A hashtag is simply including the # symbol in front of a keyword. For example #diabetes . People can subscribe to follow hashtags or they can search for them, allowing them to stay current on specific topics, and recently Twitter began hyperlinking hashtags within tweets allowing people to go diretly the search results for that hashtag instantly.

You can find out which hashtags are most popular or trending by reviewing https://hashtags.org/trends/now
Here we can see that tweets tagged with the #diabetes hashtag are on the rise:

By researching which keywords are popular at the moment, you craft messages that are relevent and timely, and by including the hashtag in your post, you expand the reach of your tweet beyond your follower list, which leads us to…

Your number of followers measures your immediate audience on Twitter. It’s a way to measure the opportunity each of your tweets has to reach and engage your audience.

Here we can see that Bing has more followers than Yahoo; and it’s growing it’s follower count faster than Yahoo. 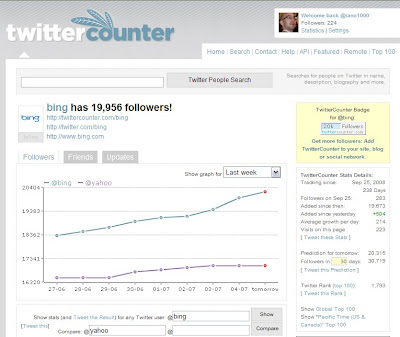 Additionally, Twitter directories like Social Brand Index or Technobabble, list Twitter profiles and usually rank by number of followers. Since we’re focusing on measurement, we will not discuss why focusing purely on your follower count ignores some of the core principles of social media (e.g. listening, engaging in conversation, adding value, etc.)

Linking to relevant content within your tweets adds value to other users, and by utilizing URL shorteners with tools like Tweetburner you can measure how engaged people are with your tweets by tracking the number of clicks on the links you post. 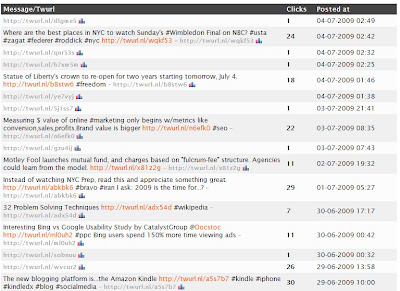 Sites like Tweetburner rank top URLs within Twitter and post lists of the top-clicked links. Appearing on these lists is similar to getting your content voted up on Digg; though the traffic impact is not as substantial…yet.
Similarly, posting pictures to your tweets adds value, and using a service like TwitPic allows you to measure how many people are viewing the pics you post.
4. Search for People Who Are Sharing Your Site or Blog Post on Twitter
You can now track when other people post links to your content on Twitter using tools like backtweets .
This is similar to Google’s Webmaster Tools, but specific to Twitter. It’s different from tracking when people click on the links you post. Backtweets actually shows you when people post links to your content organically. Without checking a tool like backtweets, you would only be seeing a portion of how the community is engaging with your content. It’s also a great way to find new people who are interested in your content. Follow them, and they’ll likely follow you back, if they aren’t already.
I encourage you to explore these tools. There are others, so please let me know which you find most useful. You can find me on Twitter @iano1000
UPDATE:
TweetReach.com shows you how many impressions your tweets have generated broken down by the users that helped spread your message via retweets. Very cool.
Klout.net shows you the reach of your individual tweets and those that were retweeted, and also allows you to see how you influence and are influenced by people geographically.
Are you already using the tools above or others? Please leave a comment with a link to your blog and I’ll be sure to stop by!

What about retweets? How do they help our tweets be found by a larger audience? And how can we measure the impact of retweets?

So one way I've found to begin measuring retweets is Retweet Rank, as recommended by Guy Kawasaki in his "How I Tweet" FAQ.

Also be sure to check out Tipereth Gloria's great set of posts on how not to use hashtags over at Digital Tip down under in Australia. Check it out at: