Earlier this week, Twitter announced the launch of Twitter Promoted Accounts, which is a new advertising feature being rolled out to a handful of companies this week.  In the announcement, Twitter used Xbox as an example. 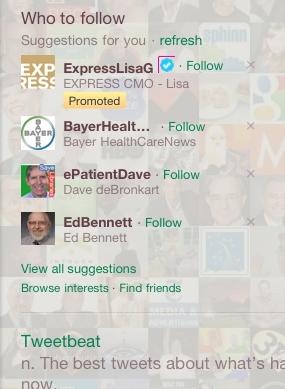 So what’s the impact of Express using Twitter Promoted Accounts?  Well, the first way to measure the success is in the number of followers (yes, it’s a measure of success):

Her average number of daily new followers has increased 7x as we can see here:

But I think @ExpressLisaG ‘s Promoted Twitter Account is more interesting than simply the increasing follower count.  I think it demonstrates a few Twitter best practices that most stbrands and many people still struggle to follow:

That’s a lot of clicks!  Now, granted she’s got over 22,000 followers, but 181 clicks being driven to a highly-relevant landing page is pretty fantastic.

A similar recent tweet for Men’s Peacoats received only 22 clicks, so I wonder if Express could use this type of data to inform SEO landing page testing going forward?

If you found this post relevant, valuable, or simply interesting, please bookmark this page, subscribe or simply retweet. Thanks!

Next post: 2010 Midterm Elections – Effectiveness of Search and Social Media on Political Campaigns